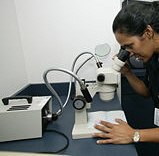 • Impurities are Oxides of:

Note* SG indicates the relation between the measured gemstone and an equal amount of water, its numerical value is between 1 and 8, values under 2 are considered light, those from 2 to 4 normal and over 4 heavy. • None in White or Black Opal.

• Distinct in Boulder Opal which may split along an Opal vein to produce two faces of Opal, due to the angle of the Opal vein’s microstructure growth in the cavity.

Referred to as 'Splits' or a 'Split Pair'. When the colour bars or veins are true, that is fairly flat and straight; the splitting operation performed by an expert lapidary will result in the Opal remaining entirely adhered to both sides of the host rock.

Optic Character: Opal is a singly refractive gem. Light which enters an Opal remains as non-polarized beams, and travels through all directions of the stone at the same speed.

Note* Pleochroism is caused by the double refraction of light and should not be confused with the play of colour which characterises Opal.

Crystal System: Opal is an Amorphous mineral, it does not occur in a particular crystallographic form. It is a replacement mineral which occurs in veins, nodules and fossils. Potch or common Opal does not have an orderly atomic structure, only precious Opal has a regular internal structure.

Atomic Structure: Electron microscope Studies (40,000x magnification) have revealed Opal is composed of tiny spheres of transparent hard silica, 0.01 to 0.0005 mm in diameter, sitting in a bath of hydrous silica.

Light passes through the spheres in a straight line but when it hits the spaces between the spheres, containing silica in solution; it is bent and deflected at different angles. The overall effect of the silica arrangement is to produce a diffraction grating which breaks up white light into its constituent parts producing the visual phenomenon known as ‘play of colour’. According to the sizes of the spheres, varying colours of the spectrum are diffracted. Red colour is attributed to larger spheres ~4000 Å in diameter, while green opal spheres are ~2500 Å. Note*(Angstrom units; 1 Å = 10 -7mm) The size of the spheres diminishes through the spectrum; RED_ORANGE_YELLOW_GREEN_BLUE_INDIGO_VIOLET. Violet is attributed to the smallest spheres.

In precious opal the spheres are uniformly sized and arranged in an orderly 3 dimensional grid, whereas in common opal the spheres vary in size and shape, discovered by Australian CSIRO scientists Darragh and Sanders in 1965.

Black and Boulder Opal do not fluoresce.

This phosphorescent afterglow is hardly perceptible in Gilson Light Opal.


Opalescence: The milky-blue or pearly appearance of common opal, opalescent glass and moonstone is caused by internal reflection of short wave, mainly blue light. This optical effect is due to the scattering of light by particles of matter in its path, such as is caused by a ray of light illuminating dust particles in the air of a room. Opalescence should not be confused with play of colour. Chatoyancy: The Cat’s eye effect is caused by the reflection of light from multiple parallel needles or fibres which are inclusions in the stone. This phenomenon is most effective when the stone is cut en cabochon in such a way that the base is parallel to the fibres. A chatoyant Opal may otherwise be referred to as having a rolling-flash pattern, when the gem is rotated the cat’s eye glides over the face. Because Opal is predominantly cut en cabochon Cat's eye Opals are not the rarest occurence, though good examples with play of colour are hard to come by.

Asterism: Created through reflection of light by thin fibrous or needle-like inclusions that lie in various directions.

There are 4-rayed, 6-rayed and 12-rayed stars in Sapphires. However asterism is an extremely rare find in Opal, very few examples of Star Opals have been recorded, including 3-rayed, 4-rayed and 6-rayed stars.

Sometimes rare patterns may be termed 'Star' or 'Windmill' pattern, these are not necessarily the same phenomena, they are usually more static with broader grains (rays) and a central point which does not move upon rotation of the stone.

Treated matrix: Include Andamooka Matrix and Sandstone Opal from Queensland, referred to by the miners as Fairystone.

Matrix never transmits light and may be detected by their porosity, lower hardness and lower density (SG 1.98-2.05). Under magnification tiny black spots can be seen in the surface colour of these stones and poorly treated examples may show uneven patches of body tone. The back and side colour is nearly always the same as on the face of the stone (as per synthetic opal) and these stones are often cut with a flat back and bevelled setting edge.

A porous surface may be observed under loupe on all or parts of the stone.

Generally detected by inspection of the join around the girdle of a stone.

Triplets are detectable when viewed from the side by the transparency of the quartz cap and planes of seperation and coloured cement may be visible. When mounted doublets will be harder to identify and may need to be inspected under magnification (by  microscope or loupe) locate bubbles in the glue.

If the stone has a boulder backing, look for ironstone inclusions travelling from the face into the body of the stone which indicate it is natural. If the stone fluoresces it is a boulder doublet. A pin heated with a naked flame can be pushed into the join line it should penetrate easily if the backing is actually powdered ironstone in an epoxy resin.

Imitation: Opal can be confused with Glass and some plastic imitations.

Glass (aka. paste) is simply imbedded with iridescent foil or as a doublet using opalescent (milky) glass. These are easily detected on sight or with the use of a loupe.

Plastic Simulants can be similar to Gilson in appearance, yet contain substances not found in natural Opal and are much lower in density, hardness and SG. These simulants are often highly porous and have a waxy texture. 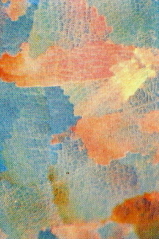 Synthetic: ‘Gilson’ Black and White Opals have all of the gemmological properties of natural Opal and are also heat resistant. There are several points of detection for this man made product:

Freedom of inclusions like potch or sand, and a stone which looks too perfect.

Gilson White Opal does not fluoresce under UV light unlike most natural white Opal. After Longwave UV is turned off the synthetic material phosphoresces for a much shorter time than natural Opals.

Under magnification a mosaic pattern showing crenellated margins can be seen wihin each patch of colour, this is also described as resembling a ‘snakeskin’ or 'fishscale' effect.