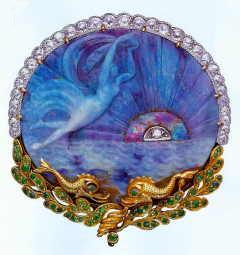 Australia’s desert regions are home to the most precious Opals in the world!

Play-of-colour is what makes Precious Opal rare – common Opal is abundant and was even recently found on Mars.

Pictured: A brooch by Marcus & Co. from the early 1900's features a Queensland Boulder Opal carved cameo of Aurora, goddess of the dawn, flying through a sky lit up with diamonds. Demantoid garnet fish and seaweed decorate the ocean bottom.

The desert sandstones from which Australian Opals are unearthed provided a unique geological environment; 100 million years ago, the forming Australian continent was covered by a shallow inland sea. As the sea gradually receded, the desert sandstones were laid down (~65mya). Australian Opal’s sedimentary host rocks deposited in what now roughly corresponds to the Great Artesian Basin. This tectonically stable region of the earth’s crust experienced only the most subtle surface folding. Australian Opal had uninterrupted eons to form in layers and harden from solution to a gel and finally a stone. The micro silica spheres that make up Opal’s structure were able to grow larger and to form in orderly arrangements, thus capturing all the colours of the rainbow and many besides, in a kaleidoscopic myriad of patterns.

Besides, the desert gem is found by bronzed ‘Aussie battlers’; hardened gentlefolk of the bush, whose appreciative sponsors are child-like visionaries and creative dreamers!

Not to mention the fossils, no, not the old-timers, the Opalised replacements of organic remains, unique to Oz!