Mintabie – Although discovered in the 1920's by a well-sinker named Larry O'Toole, it was not until the mid 1970’s that extensive mining began here. As far back as the First World War, Aborigines sold black opal at Coober Pedy which most likely came from Mintabie - 254 km to the northwest.

Red sand dunes covered vast amounts of Opal bearing sandstone much of which has been excavated almost exclusively by open-cutting (50mx50m) claims to a depth of 20 meters and as far down as 40 meters. During the 1980’s Mintabie was the major source of crystal opal and produced excellent semi-black opal.

The opal from Mintabie has a reputation for being harder than most, which perhaps bears some correlation to the fact it is found in Ordovician (500 to 440 m.y.a.) rocks, much older than the Cretaceous (144-65m.y.a.) rocks which host most of Australia‘s deposits. 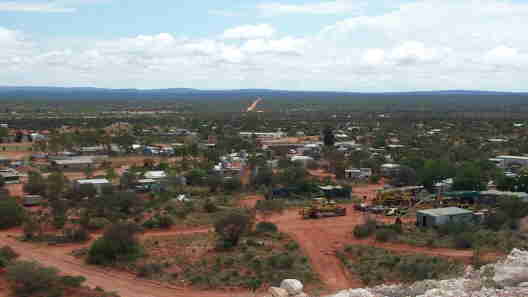 The distinctive creamy-white sandstone found at Mintabie opal fields is much harder and compact than at other opal fields. This exacerbated the challenges faced by the early opal miners and it was not until the late 1970's that a Croatian miner named Milan Rako led the way with heavy machinery; he discovered a mother-load of opal on the escarpment. Thus began a rush of bulldozers and eager men to Mintabie which lasted more than a quarter century.

“At the peak (mid 1980’s) there were around 70 bulldozers working and Mintabie opal field held the distinction of the highest per capita use of diesel of any town in Australia.” - Peter Blythe

The original diggings, known as Mintabie’s Old field, are nearest the township on the south-eastern side of the escarpment which runs north-south. Opal formed parallel to the escarpment for approximately 10 kms and mostly into a system of sand dunes to the west which are permeated by small valleys. Crystal Valley was discovered in the next valley up, followed by the Airport field, Goose’s, Gus’, Kingfisher and Grasshoppers at the northern most end of the scarped ridge.

In October 1981, the Pitjantjatjara Land Rights Act came into force and Mintabie township & opal fields are now part of a large area of freehold Aboriginal land.

Mintabie's population peaked at around 1,500 residents in 1988, but has declined steadily to approximately 250 today.