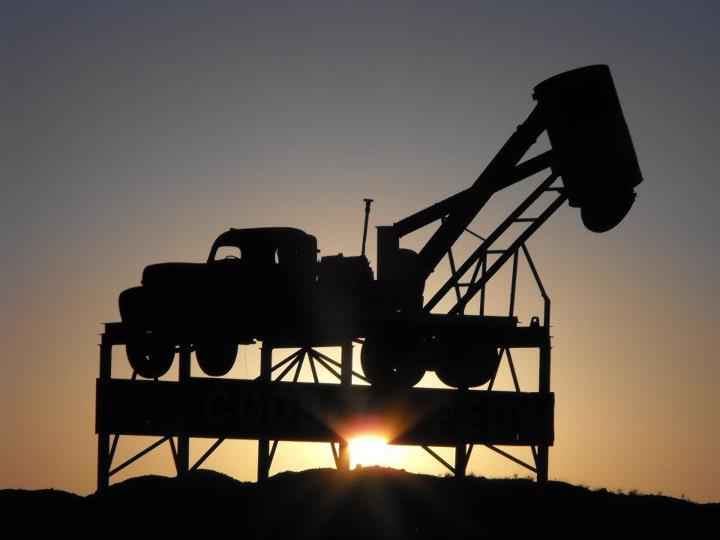 ‘Kupa Piti’ is an Aboriginal name meaning ‘White Man in a Hole’ in the language of the Kokatha people the traditional owners of the area. It was selected from four proposed names by a newly formed progress committee in June 1920.

'Coober', as it is affectionately referred to, by its 4000 inhabitants, is also known as the 'Opal Capital of the World'.

The Coober Pedy Opal fields contain the largest concentration of opal bearing ground in the world.  Known for yielding big ‘runs’or patches of full colour ‘seam’ Opal, Coober Pedy has been the single greatest producer by quantity over the last century and was instrumental in making Light Opal (milky,white,grey & crystal) the platform of the Opal industry, in terms of market availability and recognition.

Discovered in 1914 by Willie Hutchison the youngest member of a gold prospecting party which was desperately looking for water at the time. The 14 year old had disobeyed orders and strayed from camp to search for water in the surrounding foothills. When he finally returned after dark, although exhausted he wore a huge grin on his face and his eyes were brightly lit. Willie had not only located a waterhole, he also had a sugar bag full of Opal to show his much relieved father and crew.

Due to its remoteness, only a handful of miners worked the field in the early years, the first rush took place in 1919 yet there weren't any visiting buyers before 1920. During this period, massive amounts of Opal were produced and the population swelled to a few hundred. The harsh climate and lack of water, which often had to be recycled many times before being discarded, was always a problem. The situation was so critical that the Government built a 2,000,000-litre tank in 1924 which partly solved the problem, allowing water to be rationed at 110 litres per person per week.

Coober Pedy suffered during the Depression years when opal prices bottomed out. The discovery of the Eight Mile field in 1945 by Toddy Bryant, an Aboriginal woman, caused a great sensation. Her discovery of Opal within 20 centimetres of the surface was a turning point in the history of the field and went a long way towards establishing Coober Pedy's future prosperity. - Len Cram

The desert landscape around Coober Pedy is extremely barren and the climate dry and unforgiving, 45C in summer and as cool as 4C in winter. The mesas and mogul hills are not only prospective for Opal  they have provided low cost, temperate dugout living since the ‘diggers’ returned from the trenches of France in 1918. The exceptional stability of the region’s ancient sandstones makes tunnelling and the excavation of safe and adequate underground homes highly practicable. The temperature in most dugouts only varies about 5C all year round with temperatures inside being from 21C to 26C.

Not surprisingly the majority of Coober Pedy's population lives underground. This multicultural melting pot consists of 45 nationalities, Greeks, Yugoslavs and Italians predominantly. One could speak Greek throughout their stay here, the Australian accent is the exception and the choice of food is fantastic. Garlic Prawns at Tom & Mary’s are a must!

Interesting attractions in Coober Pedy include the mines, the underground churches, the local golf course which is completely free of grass and the ‘Breakaways’ which resemble a mini Grand Canyon.

To complete the outback odyssey and discover the heart of Australia and Opal country visit the Opal Capital of the World where Umoona Mine & Museum and The Old Timer's Mine are a must see amongst numerous attractions! If you are lucky and speck some good colour you might like to stay at the Desert Cave, a 4-Star underground hotel!