Opalton –124 km south of Winton, was discovered in 1887 by George Cragg, a 17 year old stockman on Warrambool Downs. Almost a decade passed before the commencement of mining on this field which proved to contain the highest concentration of opal in Queensland. 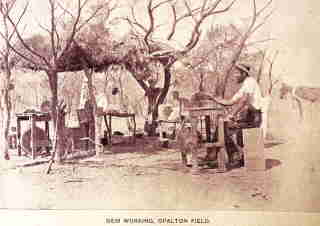 The largest piece of gem Opal ever recorded in the world was found in 1899 at Conways in Opalton by Dick Shillington and his mate Greenwood. It was 11ft long, as thick as a man’s thigh and took four men to carry it.

The opal at Conways was found mainly in waves where the level dipped down and came up again.

Working the Gem, an opal cutter at Opalton in 1901 (pictured) has rigged up an old treadle sewing machine. Others used bicycles, designing innovative hand or foot operated cutting and polishing wheels.

Opalton was first known as the Fermoy Opal fields which were infact established earlier in 1878 northwest of the township.

The magnificent Black Boulder Opal (pictured) is possesed of an uncanny stripey-pattern, it is multicoloured with a predominance of purple and red. The stone was found in the crust of a football sized boulder at 18ft by Rosie Petrie and Hans Klinger in 1993, it was specked by their dog Fritz in an open-cut at Opalton!

Why not stay in your own caravan or tent, for more details contact the QBOA.

The Black Mine was Australia’s first Black Opal deposit and is significant as it was discovered 10 years before Lightning Ridge appeared in the annals of history. In 1900 there were several hundred men idle in Jundah during the drought. With no other prospects many went gouging, it is said there were 100 miners working at Opalville & Black Mine at the turn of the twentieth century.

The opal found was mostly nodules and cylindrical pipes in the band at the junction of the sandstone and clay. They ranged in size from that of a small pencil to 2 metres in length and many were more than 10 centimetres in diameter. The larger pipes were generally filled with potch and a hard red brick-like material, occasionally carrying a little colour. They were so numerous the miners nicknamed them 'brick pipes'. It was a rare pipe which was full of colour. Most of the better pipes contained at least 90% potch, the remainder being high-quality Opal in isolated patches throughout the potch.

Kynuna - Northern-most of the Queensland Opal fields (200 NW of Winton), the main field was discovered in 1894 and lies 40 km south of Kynuna township off the Landsborough Highway.

This vast area of potential Opalisation has been worked very little and is perhaps the deepest Opal profile in Queensland. The opal country is dominated by sandstone mesas in areas which are highly elevated (320m ASL) suggesting up to 35m to the bottom level. The prospective areas thereabouts are west of the main Kynuna field and south toward Dagworth Station.