The United Nations General Assembly recognized that conflict diamonds are a crucial factor in prolonging brutal wars in parts of Africa. Fortunately Australia is and always has been a stable country with strong labour rights and a uniquely egalitarian ethic.

During the Great Shearers' Strikes in the 1890s, five hundred shearers were camped just south of Winton in outback Queensland as the town was placed under marshal law. This was not only the beginning of the foundation of the Australian Labor Party, but an opportune time when disaffected men without work were willing to chance their luck; It is by no coincidence that Opalton, 100 kilometers further south, developed into a township of 600 (nearly twice Winton's population) during the Great Opal Rush of 1895.

Australian Opals have almost always been mined by individuals, families and small partnerships. Since Opal production began in earnest at the turn of the 20th Century numerous companies have floated over the years, in an attempt to become large scale producers, all have had limited long term economic success.

Red is the most sought after colour in gemstones, red on black opals are worth $10,000 per carat or $50,000 per gram. Although this sounds expensive - gem Opals are a bargain - when you consider that a monochromatic stone such as a red ruby could set you back 10 times that and a red diamond 100 times that price! 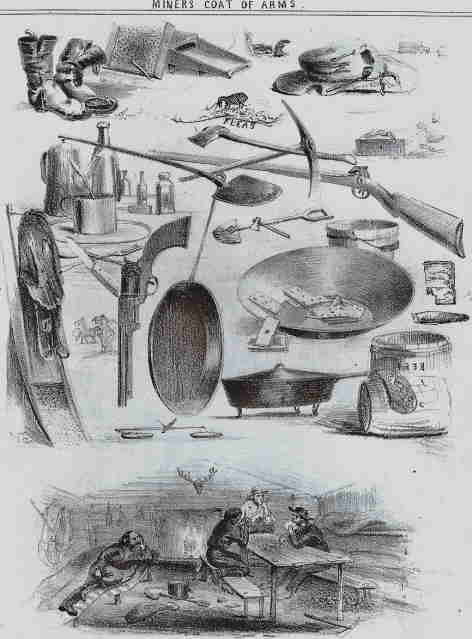 By 1854 the Australian 'Gold Rushes' were in full swing when miners, government soldiers and police went to battle. The blood soaked into Australian soil as the miners took Eureka Stockade fighting to abolish the harsh system of licensing imposed on them by the government and the cruel and inhumane treatment meted out to them by the administrative level. From this bloody battlefield came the Miner's Right.

The Eureka stockade brought about important privileges to the people of Australia such as secret voting; the right for every man to vote, short 3 year terms in parliament, and payment to members of Parliament, giving poor people the right to stand for election to parliament.

In the 1880's the first 'Opal Rushes' began in Queensland. Many of the first Opal gougers on the Queensland Opal fields were disaffected shearers and station-hands who had little or no geological knowledge. They were however joined by a number of miners who left the Victorian goldfields, after hearing the stories of Opal strikes in western Queensland.

For Henry Davenport and his family to reach for the Fermoy in search of Opal, they would have to had to bypass a number of producing Opal fields, including the Yowah, where one of the famous claims was found by another Victorian Goldminer, Mr Evans.

The Opalers came by horse, cart, buggy, wagonette or humping their swag. Some, after leaving their horses at the nearest station, hitched a ride with the mailman or a hawker going to the outlying Opal fields.

Once a jolly swagman camped by a billabong,
Under the shade of a coolibah tree,

The 'swagman' was an itinerant worker, his bed roll bundled his belongings, he likely could have specked a colourful shard or even had a dig on his foot-weary travels.

Up jumped the swagman and sprang into the billabong,
"You'll never catch me alive", said he,
And his ghost may be heard as you pass by that billabong
"You'll come a-Waltzing Matilda, with me".

Combo Waterhole, the 'billabong', where Patteron's 'swagman' met his fate is also surrounded by Opal mines. Alas the swaggie's secret spots went with him! The Opal diggers came from all over the globe. Mostly Irish, Anglo-Saxons, Germans, Scandinavians or Chinese in the early days. The shafts they dug were generally rectangular with the exception of the numerous Chinese diggings in which the shafts were sunk with rounded ends to save time, or as superstition would have it - 'so the devils couldn't hide in the corners'.

Cobb & Co. connected the nascent Australian Opal fields, from Eromanga in Queensland to White Cliffs NSW, ferrying German Opal traders who played an influential role in the development of an industry which became a crowning glory of the colony. The advent of The First World War (1914-18) meant the relationship between Germany and Australia came to an impasse until the postwar era.

The early Opal mining tool kit included;
A pick and shovel, sometimes a hammer and gad were used for hard cap rock.
A windlass usually constructed out of Giddya or whatever bush timber was suitable, with a crooked right angled stick for a handle - this took a bit of finding and most opalers ended up with iron handles. The early ropes were plaited greenhide, though steel ropes were preferred when available. At the end of the rope was a trace or hobble chain with a swivel and a metal kibble hook. This hook was used to catch up the handle of the greenhide bucket known as the kibble, it was then windlassed to the surface from the bottom of the shaft.
Besides a tomahawk for breaking down boulders, grindstones were used for removing ironstone and sandstone from the Opal. Treadle sewing machines, either hand cranked or by foot pedal, were adapted to cut and polish Opals. Most opal miners did their own blacksmithing. Some used the double headed 'Universal' pick sharpened with a chisel edge on one end and a point on the other. Others preferred the heavier 'Collins' picks, which though they had to be tempered, were either double headed or single headed with a hammer on the other end.

Europeans, predominantly of Balkan decent, were the main inhabitants and the driving force behind the Australian Opal industry's greatest boom period - centered around Coober Pedy between the 1960's and 1970's. During the late 1980's the Coorcoran Rush saw the population of Lightning Ridge boom to over 7000 as home to more than 50 nationalities.

Attracted by various ventures these tenacious individuals soon find themselves struck by 'Opal Fever 'and over time Opal mining has developed into a profession.

On the world's driest continent and in its driest parts where opals are found, the bush remains a harsh and often unforgiving environment. For many it has been perilous and unprofitable, having dreamt of hitting the jackpot instead to find meager traces. Others have been lucky! They were whipped by the fire in the stone - destined to be 'Opal lovers' if not lottery winners.
The excitement and romance of the early years may not have gone forever - !Eureka! is still out there on the Opal fields. In actual fact a good patch of red on black Opals could set one up for a neat lifestyle. Australia's magnificent outback is still home to rugged individualists or 'Little Aussie Battlers' and the Opal industry survives by their sheer tenacity. No single corporation can emulate these men and women in their pursuit nor control the natural wonder that is Opal!