The Art Nouveau period occurred during the last two decades of the nineteenth century and into the first  two decades of the twentieth century. The term was taken from La Maison de l'Art Nouveau, a shop opened by the art dealer Siegfried Bing in Paris in 1896. Art Nouveau formed the bridge between the 19th and the 20th century and changed the jewellery industry indefinitely just as the Impressionists changed art forever after.

The undisputed leader of the Art Nouveau movement was Frenchman Rene Lalique.

"I know a jeweller in love with opals, The purest diamond would tempt him in vain, He will only carve the gem of pale fire, Whose iridescence has chosen him for its lover." Robert de Montesquiou 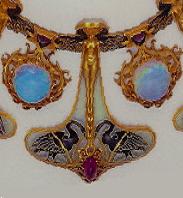 Lalique created pieces which defied the conventions of jewellery forms, focussing on artful more than gem set jewels. Although one of the finest enamelists the world has seen Lalique was extremely passionate about Opals as their depth of colour and pattern go beyond the static colours acheived in glass. Hundreds of  pieces of Opal feature in his jewelled artworks, particularly Crystal from Queensland and White Cliffs in New South Wales.

"He was never a slave to the tyranny of the diamond, never intimidated by the intrinsic value of gems. He chose gems for their artistic worth, for their value to his compositions and portrayal of nature." Vivienne Becker

The other main proponents of Art Nouveau jewellery in Paris were Henri Vever, Georges Fouquet and Lucien Gaillard. Vever and Lalique each won a Grand Prix at the Paris Exhibition of 1900. The French Masters produced jewellery of wonderful originality and exquisite craftsmanship. Their new style had swept the world, the spirit of innovation saw Gaillard employing japanese craftsmen, Fouquet and Czech painter Alphonse Mucha collaborating to produce the Opal-encrusted serpent bracelet and connected ring for legendary actress Sarah Bernhardt.

Historically the French Art Nouveau jewellers preferred Opals and applied them profusely yet in a painterly manner. Collectively their creations are imbued with a romantic dreaminess drawing from the beauty and cruelty of the natural world.

This group of  French artisans, all of whose works were profuse with Opals, includes many great names: Aucoc, Dusassoy, Eugene Feuillatre, Falguieres, Fontenay and Leopold Gautrait.

Around 1900 there were three main directions in jewellery:

Firstly, at the highest levels of society, particularly in the courts of Europe, lavish quantities of formal 'white' diamond jewellery continued to be worn.

Secondly, in more artistic and progressive circles both in Europe and in America 'colourful' Art Nouveau jewellery was emerging.

Thirdly, in Britian there was the Arts & Crafts movement, a revival of traditional crafts and a reaction against mass production in favour of a hand-made look.

& Masriera Brothers of Barcelona; Charles Ashbee of the 'Guild of Handicraft’ and Archibald Knox for ‘Liberty &

Co’ in London; Kolomann Moser & Josef Hoffmann of the 'Wiener Werkstatte’ in the cultural capital of Vienna. 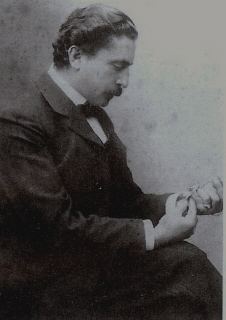 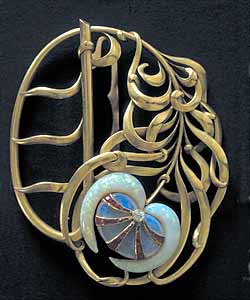 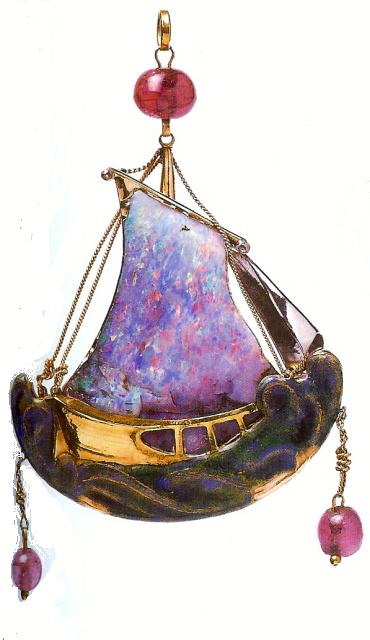 The new style was born of the Arts & Crafts movement, the principal themes being flora and fauna linked to the female form, particularly as metamorphosing insects.

The spirit of the movement was such that architects, painters and sculptors collaborated with the master jewellers to design the revolutionary new look. The 'Guild of Handicraft' and 'Wiener Werkstatte' were formal groups purposely constructed to fuse the different schools of art and create an environment for artistic enlightenment.

Art Nouveau was initially influenced by Japanese art design, adopting its asymmetry and ‘whiplash’ line to express movement, passion and vitality. Towards the end of the period leading in to the Art Deco period, Cubism had an increasing stylistic influence. "In the cultural capital of Vienna, 1900, the Secessionist movement with its swing away from naturalistic inspiration towards the more rigid mathematical and geometric forms of decoration, reflected the Continent's growing appreciation of the Glasgow School where Charles Rennie Mackintosh was demonstrating his incredible genius for architecture and related design."  A J Tilbrook

In England, William Morris was the leading figure in the decorative arts during the second half of the nineteenth century; his hatred of the machine prevented the ultimate success of the Arts and Crafts movement. All jewels were to be designed and executed by the one artist - effectively a total rejection of the increasing specialization of the trade. The resulting jewellery was not widely appealing, often amateurish and generally expensive when compared to the designs adapted for the machine and mass produced by Liberty & Co.

Liberty & Co. was prolific in the production of Opal jewellery designed by the likes of Archibald Knox, Oliver Baker, Jessie King, Kate Fischer and John Paul Cooper. Unfortunately the resultant jewellery was never hallmarked with the monograms of these artists and most remain unknown. Other British jeweller designer greats of the time included Sybil Dunlop, Arthur and Georgina Gasken, Henry Wilson, Harold Stabler and Omar Ramsden. Opals feature prominently in the works of these artists who drew inspiration from the religious iconography of the Renaissance, from Medievalism and Scandinavian folk art.

Known as 'Jugendstil' (Young Style), in Germany the craft ideal and Art Nouveau were being explored by individual workshops in Munich, Darmstadt, Weimar and Berlin. The style became a major influence on the decorative arts by 1900, among those who designed jewellery were architects Peter Behrens, Josef Olbrich and Patriz Huber. In 1907, the Deutscher Warbund was formed to promote an alliance between art and industry. This teaching institution was partly inspired by British design developments and its influence is particularly evident in the mass produced jewellery designs of the company of Theodor Fahrner in Pforzhiem, which was the center of the German jewellery industry between 1900 and 1930. Fahrner helped proliferate Opal jewellery well into the Deco era. London wholesaler Murrle Bennett & Co. marketed many of the designs which are obviously British in style and indeed Fahrner's design sources were both German and English.

By the turn of the century a new industry based around the lapidary manufacture of Opal had also been founded in the Rhineland town of Idar-Oberstein. The Germans were strong buyers on the early Australian Opal fields where they amassed vast quantities of Opal, much of which was bought as 'low-grade' or ‘candlebox’ Opal, over many years this was expertly cut and crafted into products realizing incredible returns on investment. Thus Opal became widely available to German jewellers besides being exported all over Europe and onto America. The quintessential Art Nouveau gemstone had found one of her greatest patrons in Fahrner and Germany industry, if not the Germanic peoples who to this day are outstanding amongst all who covet Opal.