During the reign of Queen Elizabeth I it was written:

"Optallio is called Oppalus also, and this stone bredeth in Inde and is deemed to have as many virtues as hiews and colors."

The Elizabethan era, famous for the flourishing of the arts, is now looked upon as a golden age. The English, who set the fashions in the 16th century, were indeed fond and avid users of opal in the formal ceremonial style jewellery of the day. Shakespeare (1564–1616) - 'The Bard of Stratford’ used opal as a descriptor of splendour in numerous texts, he poignantly described the stone in his sonnet  Lover’s Complaint, Stanza 31:

“The diamond, why, ’twas beautiful and hard,

Whereto his invis’d properties did tend,

The deep-green emerald, in whose fresh regard

The heaven-hued sapphire and the Opal blend

Shakespeare considered the gem the symbol of inconstancy because of its changing colours and included such references in several plays;

In Twelfth Night, the clown who had been referring to the sea's changeable and quick nature continues with his image and says to Duke Orsino:

“Now, the melancholy god protect thee, and the tailor make thy doublet of changeable taffeta, for thy mind is a very Opal.” - Act II, Scene IV.

Funnily enough in Elizabethan theatre, men played the female roles, which made it interesting when female characters dressed as men in Twelfth Night. The tradition of regarding Opal as female may date back to the Greek philosopher  Theophrastos who wrote  On Stones a treatise on rocks and minerals, in which he divided gemstones into male and female.

"VITZITZILTECPATL", the Aztec term for Opal meaning "the hummingbird stone", aptly refers to the likeness of the sheen and changing colours observed in the plumage of these enchanting birds.

Bernardino de Sahagún (1499 – 1590), was a Franciscan missionary to the Aztec people of Mexico, best known as the compiler of the 'Florentine Codex' , also known as Historia general de las cosas de Nueva España ( General History of the Things of New Spain). Sahagún described a stone used and named by the Aztecs since at least the mid 16th century that, given their access to the Mexican localities was likely Opal. Sahagún also fully described lost-wax casting methods he observed however since this was not concerned with the faith it was omitted from the first edition of his Historia. Although the Conquistadors brought Mexican Opal back to Europe, it was seemingly forgotten until the mid 1800's when opal sources were rediscovered in San Juan del Rio and Tequisquiapan, both in the state of Queretaro.

Petrus Arlensis de Scudalupis was a visionary, astrologer, alchemist and mineralogist who lived during the reign of the religiously tolerant and popular King Henri IV of France . Petrus Arlensis wrote a remarkable account of Opal in his work on “the sympathy of the seven metals and seven select stones with the seven planets” which was published in Latin (and German 1717) as part of the Speculum Lapidum from 1610;

"The various colours in the Opal tend greatly to the delectation of the sight; nay, more, they have the very greatest efficacy in cheering the heart and the inward parts, and especially rejoice the beholder’s eyes. One in particular came into my hands, in which such beauty, loveliness and grace shone forth, that it could truly boast that it forcibly drew all gems to itself, while it surprised, astonished and held captive, without escape or intermission, the hearts of all who beheld it... It had such vivid and various colours that all the beauty of the heavens might be viewed within it. Grace went out from it, majesty shot forth from its almost divine splendour. It sent forth such bright and piercing rays that it struck terror into all beholders. In a word, it bestowed on the wearer the qualities granted by nature to itself; for, by an invisible dart it penetrated the souls and dazzled the eyes of all who saw it; appalling all hearts, however bold and courageous. In a word, it filled with trembling the bodies of the bystanders, and forced them by a predestinated impulse to love, honour and worship it. I have seen, I have felt it, I call God to witness! Of a truth, such a stone is to be valued at an inestimable amount."

Benjamin Jonson (1572-1637) was an EnglishRenaissance playwright, actor and poet. Extremely well read, Ben Jonson delighted in controversy, he was an influential Caroline dramatist, a contemporary and competitor to William Shakespeare. Jonson was a great writer of masques, an extinct format, which mingled speech, dancing, and spectacle. Jonson reintroduced the concept that there was a relationship between Opal and sight in The New Inn also known as The Light Heart a stage comedy published in 1631:

"I had no medicine, Sir, to go invisible; nor an Opal, wrapped in bay-leaf, in my left fist, to charm their eyes with." 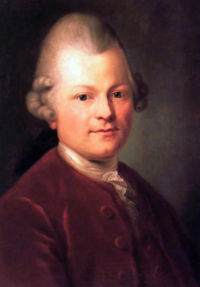 Lessing, Gotthold Ephraim (1729-1781) wrote  Nathan the Wise, published in 1779 it is a fervent plea for religious tolerance. Performance of the play was forbidden by the church during the artist's lifetime, it was also later banned by the Nazis.

"Grey years ago a man lived in the East, Who did possess a ring of worth immense From a beloved hand. Opal the stone, Which flashed a hundred bright and beauteous hues, And had the power to make beloved of God, and Man the blessed and fortunate."

The centerpiece of the work is the Ring Parable, narrated by Nathan who is asked by Saladin which religion is true: An heirloom Opal ring with the magical ability to render its owner pleasant in the eyes of God and mankind had been passed from father to the son he loved most. When it came to a father of three sons whom he loved equally, he promised it (in "pious weakness") to each of them. Looking for a way to keep his promise, he had two replicas made, which were indistinguishable from the original, and gave on his deathbed a ring to each of them. The brothers quarrelled over who owned the real ring. A wise judge admonished them that it was up to them to live such that their ring's powers proved true. Nathan compares this to religion, saying that each of us lives by the religion we have learned from those we respect.

Thus Lessing considered that only the Opals of triple rings could adequally indicate how important practical humanity was to the three great religions: the Islamic, Jewish and Christian.