In Medieval times the mendicant orders, particularly Dominican and Franciscan monks were enthusiastic about 'lithotherapy' or the healing power of gemstones.

Vincent de Beauvais (1184-1264) a Dominican monk who served as head of the Royal school of Louis IX of France. De Beauvais was interested in the use of minerals as building materials and helped advance the knowledge of ancient, early medieval and Arabic writers. He cites Opal as having a healing effect on eye diseases. 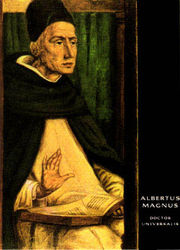 Albertus Magnus (1193-1280) aka. St Albert the Great, is considered to be the greatest German philosopher and theologian of the Middle Ages. A Dominican friar and priest who achieved fame for his comprehensive knowledge of and advocacy for the peaceful coexistence of science and religion. He was the first among medieval scholars to apply Aristotle's philosophy to Christian thought. One of only 33 persons with the honor of Doctor of the Catholic Church.

He was also one of the alchemists reputed to have succeeded in discovering the Philosopher's Stone.

Legend tells of a dazzling Opal, the Orphanus, set into the Crown of the Holy Roman Emperors, which was reputed to watch over the royal family. Albert of Cologne claimed:

"None like it has ever been seen..Its hue is as though pure white snow flashed and sparkled with the colour of bright ruddy wine... it is a translucent stone, and there is a tradition that it formerly shone at night-time."

He goes on to say that it cured eye diseases and could "render its wearer invisible, and therefore it was called Patronus Furum - Patron of Thieves."

A Guiding Light in an Age of Darkness

Regarded in the Middle Ages and Renaissance as the "stone of stones" to be given preference over all others - Opals were and still are mined at sites near Mount Libánka and Mount Simonka (today in Slovakia).

Not everyone in the 13th century was enthusiastic about the lithotherapy that the mendicants practicised. Such that it was also in the superstitious Dark Ages that Opal first aquired a doubtful reputation. The mental association of an 'eye' stone, in times when the evil eye was accepted as calmly as the price of pigs was inevitable. So a stone that started out as beneficient became maliferous.

Still it had its adherents. During the Black Plague in Venice (1433) when fever struck its wearer, it was said to flare up strongly to give warning. Extraordinarily faithful, it often 'died' with its owner.

Fair-haired girls in Germany and Scandinavia were encouraged to wear Opal, often as hair ornaments, as it was thought to add magical lustre to their golden locks. Opal was prescribed for them to remain blonde and protect them from freezing rain, wind, and other vicissitudes of the Nordic climate.