Louis XVI (1754-1793) wore an Opal finger-ring befitting the illustriously luxuriant Court he held with his Queen at Versailles. Indeed Marie Antoinette owned a famous flame Opal known as the 'Forest Fire'. The effulgence of Versailles had spread all over Europe during the second half of the seventeenth century, by the eighteenth century Paris dictated the fashions and French jewellers became ever more influential. 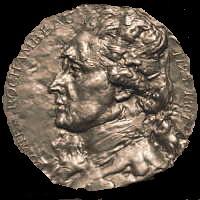 Jeanne Thérèse Tellez d'Acosta, was betrothed to the Count of Rochambeau in 1749. Her husband Jean-Baptiste Donatien de Vimeur, the Maréchal de Rochambeau (1725-1807), was a brilliant commander who swiftly rose through the ranks of the French military during the reigns of Louis XV and Louis XVI. He most admirably went to North America to support the colonists in their revolt against England; there he seconded George Washington, thus contributing to the surrender at Yorktown in 1781. The Count’s personality and decisive role in the War of Independence inspired the French branch of the Daughters of the American Revolution to name their chapter in his honour.

Towards the end of the eighteenth century, for his wife the Maréchale de Rochambeau, the Count acquired an attractive necklace of 34 Opals mounted in brilliants, this was somewhat exotic when compared to the mostly diamond jewellery worn by her high society fellows.

Queen Charlotte (1744-1818) consort of King George III of England, acquired a marvelous Opal ring around 1810. Charlotte was a patron of the Arts, the founder of several orphanages and a hospital for expectant mothers. Mozart dedicated his Opus 3 to her. She was a contemporary relation and penpal of Marie Antoinette, their passion for finery including Opals was shared even though they never met. The Opal ring passed to the Queen’s daughter Princess Mary, Duchess of Gloucester, who later bequeathed it to her niece Queen Victoria in 1849.

When Napoleon I, Bonaparte (1769-1821) presented his Empress Josephine de Beauharnais with a blazing red Opal known as the ‘Burning of Troy’. France was at the height of her power. Befitting her court Josephine wore what was the largest (700cts) and most valuable Opal in the world with great relish and frequency. Napoleon chose it he said, because she was his Helen. Just as he modelled himself on the Romans he may well have wished to emulate the passion of the ancients for this most glorious of gems. In the past the success of a jeweller hinged on a royal appointment. There simply was no better endorsement. Every Royal had their favourite. For Napoleon it was Etienne Nitot, the precursor of Chaumet, a jeweller known for his grand trappings that matched the imperial style of the first Empire. To his second wife Austrian Archduchess Marie Louise of the House of Habsburg, with whom he fathered an heir; Napoleon gave an extensive suite of Opal jewellery.

French actress Mademoiselle Mars (1779-1847), began her stage career, spanning half a century, in children's parts and played many comedy roles in over a hundred parts. The illustrious member of the Comédie-Française whose beauty and talents soon placed her at the top of her profession wore a fashionable array of jewels. Of the kind to be worn en demi-toilette was a sévigné in coloured gold with a burnt topaz in the centre surrounded by large brilliants, with three Opal drops similarly set, the gold studded with rubies and pearls; and a very complete parure of Opals set in gold studded with small emeralds. 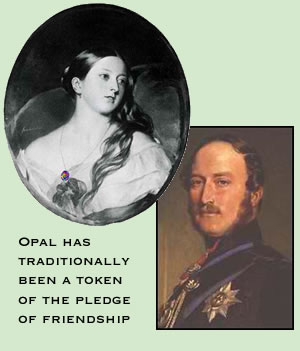 Queen Victoria (1819-1901) was a lover and advocate of Opal. Her royal highness helped popularise Opal around the turn of the century, it was no coincidence that Opals were the quintessential gemstone of the Art Nouveau period. Victoria was enamoured of jewellery and regularly adorned herself with Opals which Prince Albert gave her. In 1863 Her Majesty in the name of HRH the Prince Consort and the Queen gave Princess Alexandra of Denmark a suite of Opal jewellery as a wedding gift. It consisted of a cross, a bracelet, a pendant, a pair of earrings and three brooches. Prince Albert drew the designs for the jewels which were executed by Garrard and Co. Princess Alexandra wore the opal and diamond bracelet from this parure on her wedding day. The royal couple gave Opals to each of their five daughters and to many of their friends and subjects. Prince Albert (1819-1861) was the husband and consort of Queen Victoria and a significant influence on his wife. The Queen never recovered from his premature death. Victoria and Albert were very much in love and together started a long affair with jewellery. Prince Albert was fond of designing jewelry and often designed jewellery for his beloved Victoria. The Oriental Circlet tiara was also designed by him and set with Opal which was Prince Albert's favorite stone. The Prince of Wales presented an exceptional Opal parure to his eldest sister, Victoria, when she married the Crown Prince of Prussia in 1858. Upon her marriage in 1862, Princess Alice received an Opal and diamond suite from her late father consisting of a cross, two brooches and a pair of earrings which were made by Garrard and Co.

Elisabeth of Bavaria (1837–1898) was Empress of Austria and Queen of Hungary, Croatia and Bohemia, as spouse of Emperor Francis Joseph I. The legendary 'Sissi',  as she was called, is the most famous of Austria’s empresses and has become a 20th century icon. Considered to be a free spirit who abhorred conventional court protocol, she has inspired filmmakers and theatrical producers alike and was portrayed by Ava Gardner in the 1968 Hollywood movie Mayerling. Not only was Elisabeth known for her beauty, but also for her fashion sense, diet and exercise regimens, passion for riding sports, and a series of reputed lovers. She was at times estranged from her husband and restlessly travelled through Europe. Sissi knew Greek better than any of the Bavarian-Greek Queens in the 19th century and on Corfu island she commissioned the building of a castle which she called Achilleion. She always sympathised with the Hungarian cause and loved Hungary far more than Austria or her country of birth.

Fittingly amongst her most beautiful jewels were a parure of Hungarian Opals and diamonds, comprising a necklace, a diadem and a pair of earrings which Sissi received as a wedding gift from her mother-in-law Archduchess Sophie.