Around 100 million years ago when dinosaurs roamed the earth unique geological and climatic phenomena began in what are now Australia's desert regions, making it home of up to 90% of the world's opal supply.

Opal Birth and the Lost Sea

Precious Opal is a rare gemstone found in very few locations around the world.

During the Cretaceous Period (144 to 65 million years ago), when dinosaurs roamed the earth, the forming Australian continent was covered by a shallow inland sea.  As the sea gradually receded, the desert sandstones were laid down, the edges of which are now roughly matched by the Great Artesian Basin. These unique geological and climatic phenomena combined in our desert regions to make Australia home to the majority of the world's Opal supply. The process of opalisation began about 30 million years ago in the mid Tertiary period. Deep weathering sent groundwater percolating through the petrified mud and sands of the ancient water courses. The water (which may have been hydrothermally forced upward from below) dissolved minerals and chemically transformed plant and animal cells thus releasing large quantities of soluble silica. The constant rise and fall of groundwater levels provided ample means for silica rich solutions to penetrate the ground. As it travelled along faults and joints in the sandstones, the silica rich solution became entrapped above impenetrable layers of clay and precipitated silica gel within cracks and voids. It occasionally replaced organic remains - shells, plant fragments and the bones of cretaceous marine creatures (including Pliosaurs & Plesiosaurs), that once lived in the prehistoric billabongs. The interaction of enrichment and evaporation formed a silica gel which over several million years gradually hardened into opal. (Five tonnes of water would evaporate in order to create a five pound piece of Opal.) In most cases colourless opal (known as potch) was formed. However, in rare locations of Australia's outback, all colours of the rainbow spectrum were preserved and can be found in precious opal.

Scientific research & debate continues on the Genesis of Opal

Recent research into the deposition and genesis of Australian opals has been challenging the widely accepted scientific theory of a slow and gradual process of lamellar (layer upon layer) opal deposition over millions of years.

There is also conjecture as to the exact geological timing, when supersaturated silica solutions began the journey to becoming Opal, some older texts quote 60-100 million years as a base point. In more recent studies a complex ion exchange process that can be demonstrated under laboratory conditions shows that in geological terms Opal could have grown more rapidly, perhaps in as little as 2-3 million years.

The presence of aerobic microbial remains in opal has been the focus of studies suggesting bacteria act as a 'bio-reactor' resulting in enzymes and acids important in the formation of opal. This would suggest the opalisation process occurred quickly during the Early Cretaceous period, over 100 million years ago.

However that Precious Opal formed under very special conditions is agreed by all.

Although Opal is generally found as seams in sandstone, in remote outback Queensland, Opal occurs within the cavities of ironstone concretions known as 'Boulders'. The boulder host-rocks were formed by iron-rich chemical weathering, during the sedimentary deposition of the vast desert sandstones. Drying then produced shrinkage cracks which, along with other types of cavities and porosity traps were filled with silica bearing solutions during later alteration and silicification.

Some scientists believe that Opal formed via the silica laden fluids moving through the layers of subsurface strata under fault-generated hydraulic pressure and at temperatures greater than 100°C. The faults caused by tectonic processes, created pathways for fluids supersaturated by amorphous silica. This fluid, while under pressure, became entrapped. It cooled, gelled and hardened to form Opal.

Boulders are generally round, ellipsoidal and elongated shapes. They vary in appearance and range in size from an almond, to a discus (known as a ‘pancake') and can be as large as a huge tractor tyre (sandstone or 'sandy' boulders). 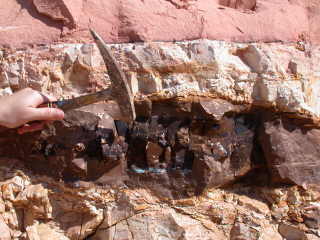 Boulders vary from the coarser grained sandstone boulders to the denser fine-grained ironstone boulders; they display varying hues of chocolate brown and caramel resembling wood grain. Veins of Opal form in both horizontal and vertical cracks, radially or randomly arranged, within these concentrically textured host rocks. In its mobile state the silica solution permeated and occupied the veins and joints within the boulder. Gradually the moisture content was reduced by evaporation to form a gel. Spheres of amorphous silica formed in this gel with the denser, larger spheres tending to sink to the bottom, and the smaller spheres tending to remain suspended near the top of the cavity surface. This sphere settling process produces the ‘stripey’ or 'anbanderas' pattern, commonly seen in Boulder Opal, as the spheres settle parallel to surface of the ground.

Deposits of silica as previously explained, as well as the replacement of woody tissue by silica, formed opal deposits of various kinds in Queensland.

'I'M AN IRONSTONE CONCRETION', adapted from Q. 'Am I a dinosaur egg? A.No I'm an ironstone concretion', at the Dinosaur Park, Queensland Museum Brisbane.